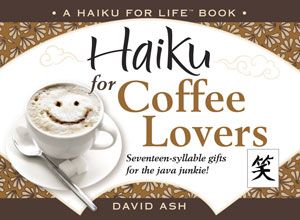 Groucho Marx made the phrase popular in the movie A Night at the Opera, but everyone watching vaudeville knew what it meant when someone asked, “Will it play in Peoria?” If a new show was successful in that Illinois city, a demographic microcosm of Midwestern values, then the show could gain mainstream acceptance in the rest of the country. Many performers before and since have cut their teeth in Peoria to find out.

As both a publisher and an author, I have to listen to the customer. If my friends and family think my work is great, that’s nice to hear, but fairly insignificant. What a wider group of prospective readers thinks matters more. And there are some things every publisher can do to improve the odds of seeing whether a book will fly after launch.

How It Works with My Haiku

I write and publish a series of humorous haiku gift books. Each of the 100 17-syllable pages per book is a chance to elicit a chuckle or bomb miserably.

The writer in me thinks I’m hilarious. But the publisher in me remembers something my college choir director said once to other choristers: “You know, one in ten of David’s jokes is incredibly funny. You can’t believe how funny he can be,” he said. “The problem is, you have to listen to the other nine to get to it.” It hurts to admit it, but he wasn’t far off.

Do I know which jokes will get the laughs? Of course not. If I knew how to craft a winner every time, Jay Leno and David Letterman would be fighting for my services. But I know something about the process of finding out. After Leno finishes taping a show, he goes out to a local comedy club and tests material for the next night. What they laugh at tonight, we may laugh at tomorrow.

So I write 150 to 200 haiku per book. And then I assemble a team of guest editors-one to two dozen people with knowledge, expertise, or interest in the book’s subject area. Friends and family get asked too, and they give a helpful baseline from book to book, but I ask a different group for each book, including professionals.

For example, casino dealers looked over Haiku for Poker Players and baristas read Haiku for Coffee Lovers. The latter had a team of 13 guest editors. Thanks to their reactions-

Internet access
in my local coffeeshop:
I’m wired and wireless

-made it onto the back cover.

okay, I’ve showered,
dressed, and finished my first cup-
hand me the paper

-fell flat and missed the cut.

The most polarized vote was for a haiku that originally read-

Marginal notes made it fairly clear that the problem was the word “stupid.” So I changed the first line to “Excuse me, I’m the” and published it.

Guest editors can also tell me when I misuse a term as well as which jokes fall flat. If I tell a joke, and they don’t get it, something’s wrong! My wife has made a first pass at copy editing by the time guest editors see it, but occasionally they catch something she missed. (A professional copy editor makes a last pass once the final 100 have been selected.)

I ask guest editors for an immediate gut reaction. The haiku come with a one-page instruction letter that shows how to quickly check, X-out, question, or flag a haiku for its quality or problem. Most guest editors are done in 10 to 20 minutes and mail the haiku back to me in a self-addressed, stamped envelope. I give each guest editor a free copy of the book when it’s done and put their names in the acknowledgments.

Then I count the votes for each poem, focusing on checkmarks (liked it), question marks (didn’t get it), or Xs (didn’t like it) and come up with a formula to rank the haiku. Most people use Xs sparingly, so an X might subtract two or three checkmarks from the score. Question marks might subtract half a checkmark. Once the spreadsheet sorts the scores, I have 90 or more I can be optimistic about, and then I look at the ones on the borderline to choose the remaining 10.

The ones that don’t make it go into a reject file. Over time, I have found patterns that tell me what might be more likely to get an X. Now I write a little differently, hopefully creating better initial material. I’ll never just write 100 haiku and go straight to press, but progress is good.

It’s easy to imagine using the same system for other kinds of compilations, although it may be harder to recruit guest editors for longer material. But what if your book isn’t a collection of haiku or anything else? Whether you’re publishing mystery novels or instructional guides, you can still use this process. It works on books with continuous, orchestrated text too. Put together a team of trusted readers, or visit an existing and appropriate book club; they’ll be thrilled you’re asking for their opinions.

What you give your guest editors will, of course, depend on your book and your sense of how they can best participate in shaping it. Maybe you’ll want to write 10 different versions of cover copy and see if a couple of them stand out for your panelists. You could try different titles and/or present blurbs (existing or to come) and ask if they’d persuade these readers to buy your book for themselves or a friend. If you have a novel, try asking guest editors to read the first 20 pages and see if they’re hooked or if they have problems. For nonfiction, ask whether the table of contents covers what they want to know, and see what’s missing. You might just learn what your target market thinks is valuable.

Wouldn’t it be great if every author did something like this? Well, maybe. But even comedy has many different markets. You may love Bob Newhart and hate Don Rickles, or vice versa (or you may be asking, “Who are they?”). It’s important for guest editors to represent the right readers for a book. And it’s also important to remember that markets change over time. Did you know that Peoria, Arizona, is now larger than Peoria, Illinois?

Your gut may still tell you what content works and what doesn’t. But your customer should be consulted every now and then to make sure your gut is right. You don’t want your opera to close after just one night.

David Ash is CEO of Basho Press, which publishes the Haiku for Life® series of humorous gift books. Formerly a newsletter editor, entertainment reporter, radio announcer, and choir director, he says he thinks being a publisher looks sane and stable by comparison. To learn more, visit BashoPress.com.  This article originally appeared in the February 2009 issue of the IBPA Independent and is reproduced here with the kind permission of IBPA.

Rosemary Jones manages this website, writes books about books, collects Nellie Bly cards, and creates stories for RPG publishers in her spare time. Check out her latest projects by clicking on the Nellie Bly card.